Along the banks of the Cape Fear River lies the old port of Wilmington North Carolina, said to be one of the most haunted cities in the state.

Ancient Live Oaks line the shady streets, and narrow alleys wind through the stately homes of downtown. At the corner of Third and Market Streets, in the very center of old Wilmington is the Burgwin Wright House, one of the oldest homes in the city. Almost three hundred years ago, this was the site of an old jail, complete with whipping post for disobedient slaves. The ballast stones from the jail are part of the home foundation.

Mr. and Mrs. John Burgwin built the home in 1770-1771. Unfortunately, Mrs. Burgwin died in 1770 before completion. When Mr. Burgwin built the Hermitage in Castle Hayne2 , Burgwin’s business partner C. Jewkes, wife Ann G. Wright and their family occupied the home. George Wright who had grown up in the home later purchased the property in 1799. During the Revolutionary War and British occupation in 1781, the Wrights continued to live in their home even while General Cornwallis had made it his headquarters.Towards the end of the Civil War, the Union seized the the house (along with the Bellamy Mansion) and used it as officers’ quarters. The city of Wilmington rented the home once more during WWII to house officers stationed in Wilmington. 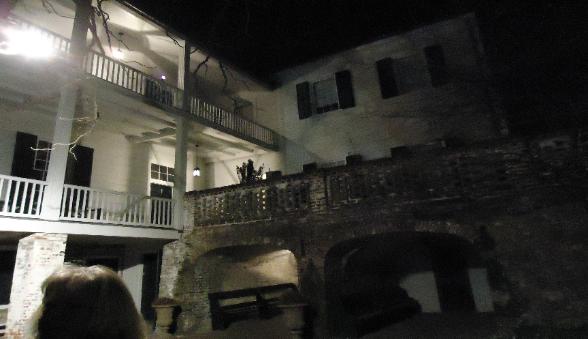 With its long and exciting history, it is no wonder The Burgwin Wright House has the reputation for being haunted.After some restoration, the home became one of the historic places to visit in Wilmington. Almost 70 years ago during one of the first Azalea Festival tours, a docent was shocked to see an antique spinning wheel begin to turn on its own. The wheel had been stuck in place for years, but there it turned, faster, and faster as they watched. As quickly as the wheel started to spin, it stopped. The group cautiously approached and tried to spin the wheel, but as before, it was stuck fast! In the past several years, reliable witnesses have reported apparitions walking the hallways. Men in colonial knee britches, Ladies and Gentlemen in Edwardian dress, and possibly a slave outside near the debtors’ jail. In 2017, Port City Paranormal arranged to investigate the Burgwin Wright House. After exploring the history and hauntings of several homes and businesses in the historic district, we were especially excited to visit the ghosts of this well-known haunt.

Jc Anderson conducted a pre investigation interview and a grid of the site was prepared. The team was blind to the history and location of the site until arrival. To cover the site adequately, a map and time schedule was designed maintain optimal distance between each sub team to avoid sound contamination. Each sub team was given one hour in each location so every area was investigated twice that evening.At 7:30 Pm, March 4th we entered the house with our audio recorders on, and began our set up.

Equipment:
Each team member carried a personal portable audio recorder and several backup recorders were placed throughout the site. Seven static cameras (with audio and infrared capability) were positioned in areas of past activity. These were the outside Kitchen, Basement (site of old jail), Library, Parlor, Supper room, 1st floor Sitting room, 2nd floor hall, and second floor porch. We positioned a trail (trap) cam in the attic. No equipment was set up on ground level (current offices and gift shop) due to renovations. Each group had a portable video recorder; Team #1 employed a full spectrum camera while several investigators used still cameras set to low light.Mel Meter readings showed a baseline of 0.1. No unexplained spikes were noted except normal elevations associated with electronics and refrigeration units.

Weather: The outside temperature ranged between 45 and 35 degrees, skies were clear with the moon at a 40% waxing crescent phase. Relative humidity rose from 40% to a high of 75%, the wind remained calm at 2-3 Mph. NOAA report lists solar x-ray activity at normal levels but Geomagnetic Activity during the reported period was at storm level.

Observations:The house felt warm and inviting, but a general unease as if being watched was experienced by investigators on both teams , particularly in the attic area. Although hearing disembodied voices at sites can be rare, this house seems filled with mutterings and faint conversations that were just out of range. At one time Doug’s group went to the 2nd floor porch. Just as Doug left the guest room to follow, he heard a loud cough and felt drawn to the hallway where he distinctly heard a female sobbing. While investigating the Library, faint bumps and possible footsteps were heard from the 2nd floor above, most likely emanating from the guest room. During this investigation, we were unable to capture unexplained visual phenomena or apparitions on video or still cameras.

The EVP*: As mentioned before most of what we recorded was faint and hard to interpret. We rarely get full sentences just partial phrases at best. Please note that the number and quality of EVP does not necessarily reflect the intensity of the haunting at any site. Multiple investigations are useful in solving any mystery.Neither residual nor active hauntings are predictable, but most researchers believe whatever “energy” spirits use to communicate tends to fade over time. Researchers often agree that the emotional intensity of the moment or activity that was frequently repeated over time can spur a haunting. A casual spat would not likely imprint, where the experience of repeated beatings or a savage murder would cause a ”stain”. (Environmental imprint).

During our Burgwin Wright House investigation, most of the recorders captured sounds that seem interjected into our conversations. An example would be while Doug and Kaitlin were discussed Georgia architecture, an unexplained voice was heard to utter a few syllables. We recorded a large number of whispers both male and female throughout the house, most were unintelligible, but the source remains unexplained.Modern Parapsychologists theorize that there may be some sort of barrier between our world and the next. What we often record is very similar to hearing a conversation in another room; you can hear the voices, but not what was actually said. Though not an actual EVP (does not contain a voice) there were several unexplained “tapping” noises.

After ruling out an environmental sources, none seemed direct answers to our line of questioning. These recordings may be significant because it was heard as if from multiple locations, but the recordings revealed was located closer one investigator than the other. Again, all electrical and environmental sources were eliminated as the cause. Around 9:30 Pm, team #1 moved to the outside kitchen. As a matter of inquiry, we asked about various kitchen items and their use. Someone must have been overseeing our visit! One of the team asked if one of the items was a saltshaker. We recorded, “That’s salt, your right” This seemed odd because in the kitchen salt was usually shaved off a block in small pieces for cooking and large shakers were used by cooks for flour or to top off deserts with cinnamon, sugar, or other spices. Still early in our investigation, Jane’s group entered the subbasement (the old jail) where prisoners once languished in chains. We had been commenting about items in the prisoner area when we recorded “Right, That time.” Today, part of the old jail is visible through a window built into the basement the basement floor.

More active responses were recorded when Doug entered the first floor bath. Warned that the toilet tends to run, Doug quipped, “Why does it have legs?” Although we did not hear it, “It Does” followed his joke.

As he moved inside the room, he felt a slight change in the atmosphere. He commented aloud (for the recorder) “this is a strange place.” A hoarse irritated voice responded, “Leave!” Half past Midnight, we took a short break on 2nd second floor. Around 1:00 Am, we left to continue our investigation. As we filed out, an unknown male clearly said; “Make us see.”The main basement and visitors entrance was close at this time for renovations. Risking being covered head to toe with plaster dust, two investigators ventured down for an EVP session. In a very hushed tone a female voice was recorded as she called out the name “Stephanie”. Later we heard the same voice say “Down here.” Both EVP were recorded on separate recorders, and evaluated by multiple listeners.

Port City Paranormal is grateful for the opportunity to investigate this important historic site. We want to thank:
The North Carolina Society of Colonial Dames,
Museum Director Mrs. Christine Lamberton,
Ms. Kaitlin Butler, our docent and host for the evening.

The Burgwin Wright House is open daily to visitors. Call (910) 762 0570 or email info@burgwinwrighthouse.com.