The Maco Light is a true North Carolina legend. The tale has been passed from generation to generation for over one hundred years. The apparition has been witnessed by scores of locals and once by President Grover Cleveland![1]

Years ago,while swinging on the back porch one sultry night, my cousin told me the story of Joe Baldwin. Joe was a conductor who is said to have been decapitated in a collision between a runaway passenger car and a locomotive one rainy night in 1867. Joe was alone in the last car when he realized his car had come uncoupled from the rest of the train. Knowing there was another train due, he ran to the back platform and franticly waved his lantern to warn the oncoming train. The engineer did not see the signal from the stranded car and Baldwin was decapitated in the accident. His head was never found, so Joe is doomed to swing his lantern forever, and search the tracks for his lost head.*

Port City Paranormal was invited by the current resident to investigate the site in 2009. Our research uncovered the details of the actual event in the archives of New Hanover Public Library. In an article written by Professor James C. Burke[1] University of N.C Wilmington, we found that it is not “Joe Baldwin” who haunts the tracks at Maco, but most likely Mr. Charles Baldwin, a conductor for the Wilmington-Manchester Railroad line.

The Wilmington Journal had run an article on Friday, January 4, 1856, about the train accident near Hoods Creek ( Maco area). The paper reported that the mail car attendant E.L. Sherwood was slightly injured and conductor Mr. Charles Baldwin,” was thrown from the train with such force as to inflict a fatal head injury” and was transported to a Wilmington hospital. The article went on to explain the train had encountered mechanical problems around 10 miles out of Wilmington. Engineer N. Walker uncoupled the mail car and caboose, and the engine limped on to Wilmington for repair. Late that night the returning engine collided with the mail car and caboose. Coroner J.C. Wood was noted in a January 14th issue, to have summoned a jury that found the accident had occurred because Baldwin failed to hang a lantern that would have alerted the engineer to slow down. The same issue contained Charles Baldwin’s obituary. Although he never regained consciousness, Charles had lingered on until January,7th 1856 He was buried in St. James Cemetery in Wilmington N.C. Later his body was moved to another local cemetery and his headstone was lost. His grave remains unmarked.*

It is said that if you go to the old tracks near Maco and look west, you can see him swing his warning lantern above the left rail.

On Friday, January 23, 2009, Port City Paranormal held a vigil at the site, south of Highway 74/76. The location of the accident is now difficult to find because the tracks were removed in 1977. The gravel rail bed remains in only a few areas and there are a few pilings remaining marking the spot of the old trestle. Doug used a Cannon XTI, ( set to slow speed, automatic exposure with no flash and self timer to prevent camera shake) to take photos where the old track had been. The set up about 150 yards from the highway, so we were careful to note traffic that could be mistaken as evidence. We noted this anomaly and compared it with the preceding and following frames which appear normal, showing only a fading sky and darkness. The red lights to the lower left were not seen at the time and subsequent photos rule out reflective surfaces along the path.*

The glowing orbs suggest a light that swayed back and forth ever so slightly.*

Learning that Baldwin had neglected his duty and was responsible for the accident, we wonder if Charles now swings his lantern to warn others of danger, or does he still see the phantom engine that caused his fate streaking towards him through the darkness?

Port City Paranormal would like to thank The New Hanover Public Libary, Ms. B. Tetterton and Mr Mark Konig of the Wilmington Railroad Museum for their help with our research.
Photos of the Maco Light By Douglas E Anderson Port City Paranormal 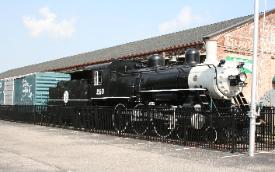